Andrew Brooks, CEO of Pocket Enterprises, masterminded a reusable, sealable cup that collapses when not in use to a convenient fit-in-your-pocket size, The ‘pokito’ cup was launched with the help of Kickstarter crowdfunding on November 3, 2016. The client needed support to secure media coverage (print, broadcast and online) in the run-up to launch to drive people to the Kickstarter site and increase sales. Client gave RMC the brief after getting frustrated at lack of results from a bigger agency. 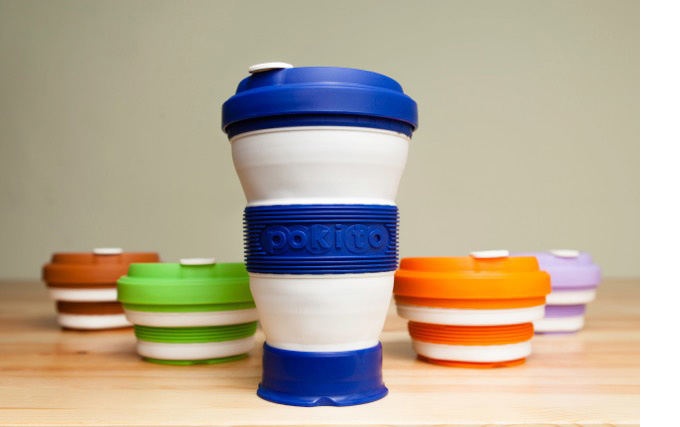 The huge waste of 2.5bn cups thrown away in the UK alone suddenly become big news about six months before launch, thanks to Hugh Fearnley Whittingstall’s War On Waste campaign. Our media campaign told the story of the inventor’s light bulb moment, his long struggle to create a better reusable cup, its green credentials & how it was good news for the planet. We reviewed/edited Kickstarter website page, wrote press releases, followed up with phone calls to news desks and used media contacts.

Media coverage was shown to directly drive traffic to the Kickstarter site. Within two days of campaign launch, the pokito crashed through its £12,000 target & went on to reach £100,000 within 28 days. Successful Kickstarter launch meant cup went into production in a factory in Teesside.

What the client said: "Rachel's input into our Kickstarter campaign was fundamental to its success. She arranged crucial interviews under intense time pressure with some key players in the media, including the BBC, The Times and Daily Mail. I can't recommend her highly enough."

"Rachel's input into our Kickstarter campaign was fundamental to its success. She arranged crucial interviews under intense time pressure with some key players in the media, including the BBC, The Times and Daily Mail. I can't recommend her highly enough."

Rachel’s work for us has been key in expanding visibility and positioning in our sector.  She has led a series of campaigns for us in targeted publications which has done much to raise our profile.  We are very pleased with all her hard work and we look forward to continuing to benefit from the professional services she can provide.

“Rachel supports communications at Woundcare4Heroes and she is loved by the whole team. Her media skills and contacts are endless, she is 110% reliable and always delivers with speed. A true asset to WC4H and absolutely worth her weight in gold.”

"Rachel looked after a lot of our communications - internal and external - and has done for several years now. She has secured coverage in TV, press, trade journals and online as well as managing our e-newsletter and website. Whether it is organising a symposium at short notice or project managing a photoshoot, she repeatedly gets fantastic results for us. The other great thing about Rachel is she really cares.”

"Rachel creates great content for my property services websites. She has a real understanding of our business objectives and works to a very high standard. She is proactive, friendly and fits in well with my team."